They said we were crazy. They were right. Anyone who signs up to write a 50,000 word novel in one month has delusions of grandeur at the very least. I had to see some of these fellow deranged writers. So, you ask...what's it like to attend NaNoWriMo's Night of Writing Dangerously? Put another way, how many angels can tap dance on the head of a pin, while simultaneously typing 3200 words in 30 minutes? (More on tap dancing later).

I had an inkling of what I was in for. I'd read the official write-a-thon page promising six hours of furious typing in a swanky San Francisco ballroom, bolstered by 224 like-minded individuals imbibing cocktails, cupcakes, and candy in equal proportions. Heck yeah! I was definitely pulled in by the Cartman-like "punch n' pie" tactics. The opportunity to boost my word count with such a focused session was already enticing, but then you appeal to my sweet tooth? Sold.

Also, the evening is noir-themed, meaning I get to Dress Up. Double sold!

So, I put together a quick fundraising page and posted to Facebook. I was unprepared for the jaw-dropping generosity of my peeps, ranging from my great-aunt, to a former coworker, my midwife, and even a random stranger. In about a day, I had nearly doubled the baseline goal of $275. That entitled me to a +1!

That's when it struck me that I still don't know a whole lot of writers, at least not well. Ben flippantly offered to come along and write code - tempting! But you're on kid duty, honey...sorry. So, I messaged everyone in my network who I thought might be a writer. I spammed a bunch of people from an amazing critique workshop I had just attended.

One intriguing possibility was a childhood best friend, now an impossibly cool chick who happens to live in San Francisco. But, we hadn't seen each other since we were - holy crap - like ten years old. Her mom had prompted an FB friend request, but that was the extent of our long-dormant relationship. My erstwhile buddy had added me to the invite list for a few Litquake events over the years, so I at least knew she liked to write. I crossed my fingers and added her to my spam campaign. Guess who was the only enthusiastic "Yes!" out of everyone I emailed?

She - and here I'll name her as the dazzling Alia Volz - had never done NaNo, but said she was game to switch back to her novel for the occasion of copious November freewriting. She even offered to put me up for the night. Plus, it turns out that Alia has a closet stuffed full of vintage noir-type clothes in my size. So many stars aligning! Now...all I needed to do was write a crap-ton and shop for nylons with a seam up the back.

And, non-trivially, plan and execute my daughter's fourth birthday party at our house, which was the day before the Night of Writing Dangerously. Luckily, leftover cupcakes boost word count. This is known, Khaleesi.

The next morning, I think I left a cartoon cloud of dust as I sped out of the house. Bye, family! Have fun, but not as much as me! The only thing that could have made me more pumped to attend TNOWD was the mind-blowing reunion it had catalyzed. I wore my Cats...In...Space! leggings especially for Alia, as a tribute to our days trouping the wildflower fields of Willits as "opera cats." After she showed me around her retro-chic flat, we caught up a bit on the last freakin' twenty-five years over drinks, brunch, and more drinks. What better way to prep for an event with an open bar?

Then we tarted up, classy-style (not an oxymoron). Her delightful husband chauffeured us to the Merchants Exchange Building, where we zipped up to the 15th floor, home of the elegant Julia Morgan Ballroom. That's when it hit us that 225 people...is a lot of people. We winnowed our way up to the bar and ordered a couple of GimLits (haha) to deal with the onset of black-tie claustrophobia. Luckily we were fashionably late, so it wasn't long before they opened up the main room, where we grabbed a table near a window seat. 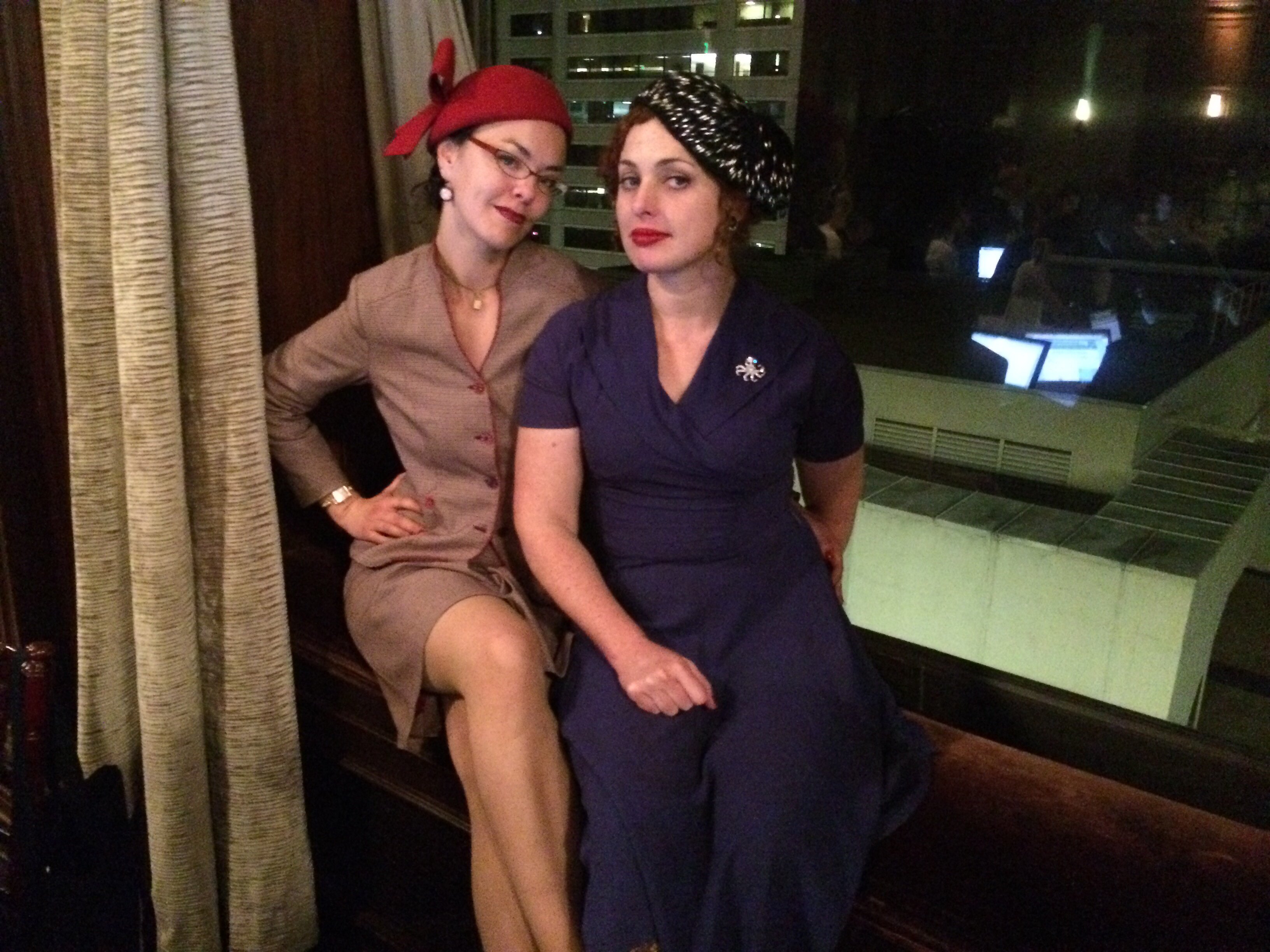 The bursting ballroom of Wrimos clustered around their respective tables, eight laptops each, in a ring of touching screens. The close quarters walked a fine line between camaraderie and where-do-I-put-my-flight-of-empty-glasses. (In the center, behind your screen, next to the candy centerpiece). Alia opted to scoot back and write with her laptop on her, um, lap. What a weirdo, right? 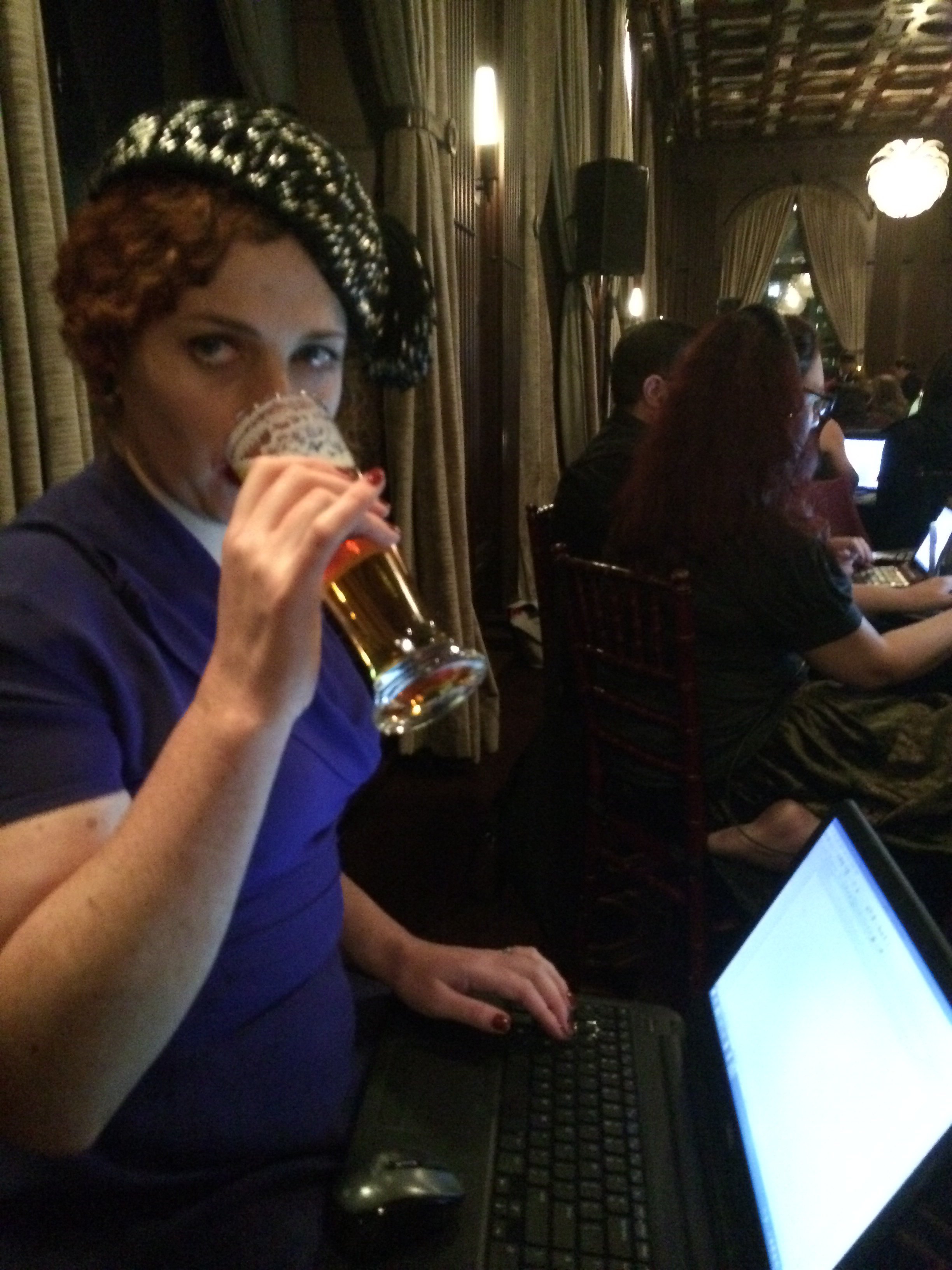 The night is peppered with team-based, two hour long "word wars." Our table became Team Chicken Hat, so-named for the ML (Municipal Liason) presiding. Some people go with the little 40's fascinator hats, others go in another direction entirely. My favorite hat of the evening was a giant, velvety facsimile of pumpkin pie with whipped cream. This was later topped with a golden paper crown, signifying that the bearer had just finished their 50,000 words for the month. Already! Every time someone crossed that finish line, they went up to the podium area and rang a bell, then passed Go and collected their crown. This happened kind of a lot.

Word warriors may also aspire to the solo triumph of "word sprints," each about 15-30 minutes long. After we heard the sky-high results for the first sprint - something like 2k in 15 minutes - I think those of us on Team Chicken Hat realized that we weren't quite in the same league. So, we each just plugged away on our novels as best we could, with plenty of breaks to fill our candy bags, coffee cups, and martini glasses.

Periodically we would be treated to an Inspiring Speech. For me the most notable one of the evening was by Grant Faulkner. He cheated. After waxing on about the importance of pushing your comfort zone, all with a sense of joy rather than pain, he tried something he'd never done before - tap dance. A crowd joined him in support, sort of mosh-tapping. Well played, Mr. Faulkner. Wait, wasn't I supposed to be writing?

As the night wore on, I began to freak out a little that I hadn't written nearly as much as I'd hoped. What with all the treats and talking and tapping, it's fair to say that I was pretty distracted. After averaging a decent, yet still below par, 1000 words each day of November, I was planning to really ratchet that count up at the event. Isn't that why I'd raised $500? Well, that, and to benefit the Young Writer's Program. However, I felt like I owed my sponsors some major productivity. I popped on headphones in a desperate attempt to insulate my brain. Yes, under my hat. What, you expect me to take off my silly hat? Not at the Night of Writing Dangerously. 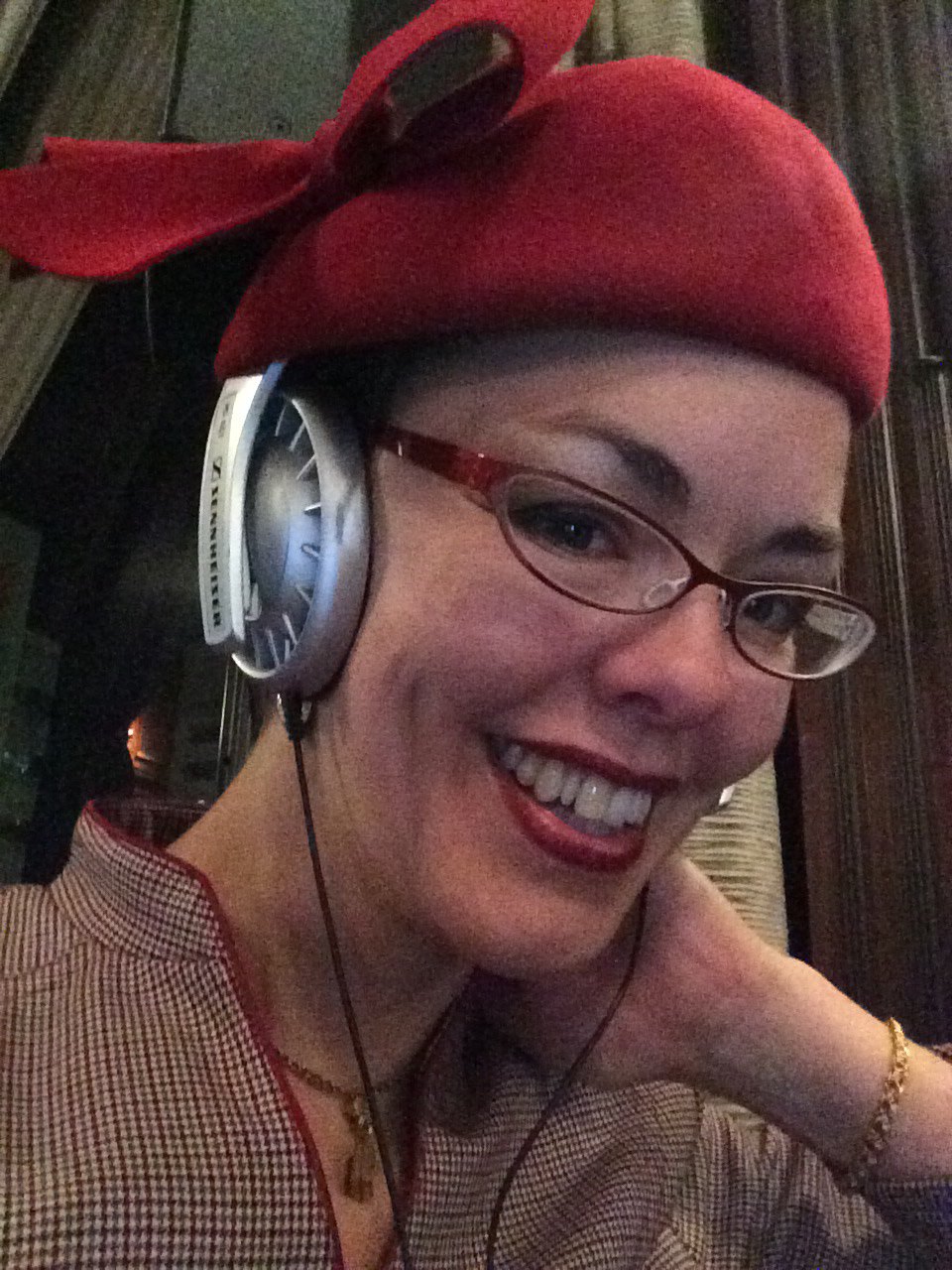 By closing time at 11, I had written less than 3k. Okay, that was my second-best day of NaNoWriMoing (it's a verb now), and my third-best day EVER. However, my expectation of surpassing all expectations set me up for disappointment in that regard.

And yet, there was still a certain ebullience to the night. Perhaps I'd been deluded to think that I could focus on writing productively while surrounded by sumptuous silliness. However, I'd broken down the illusion that every writer is an island, suffering for their art. It's supposed to be fun! And why not drag your friends along for the ride? For me, the night was about reconnection and solidarity. Plus, cupcakes. Mmmm cheesecake ganache cupcakes....

Afterward, Alia's husband Kevin picked us up and escorted us to a fine local establishment for a second-dinner of Hot Corned Beef Cocktails. 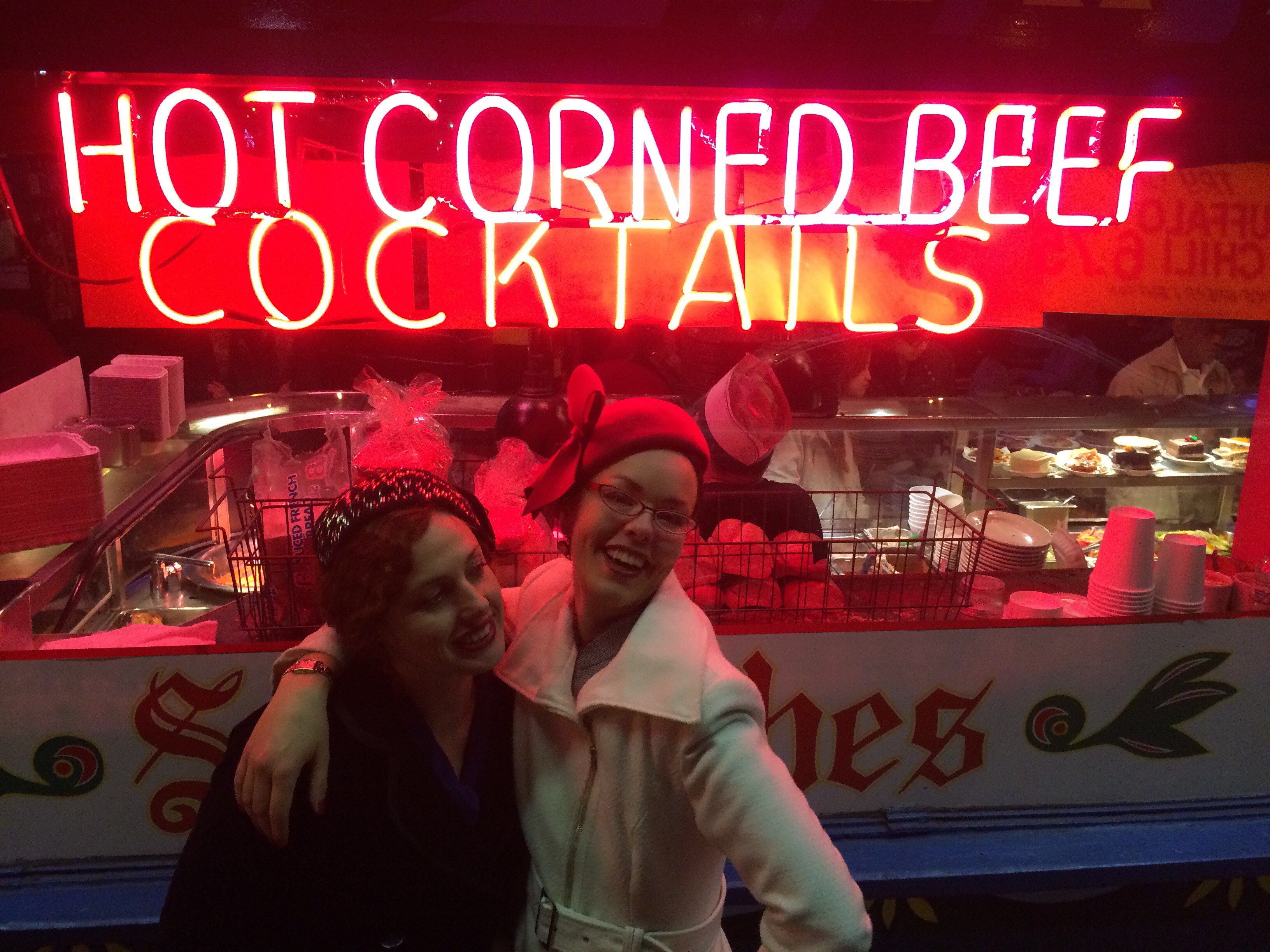 Kevin happens to be part-owner of the hallowed independent bookstore Green Apple Books in the Inner Richmond neighborhood of SF. In the morning - after doing my writing, I assure you - I skipped over to check out where I'll be shelved when I finish my novel. Hm, next to Garth Nix. Not bad. 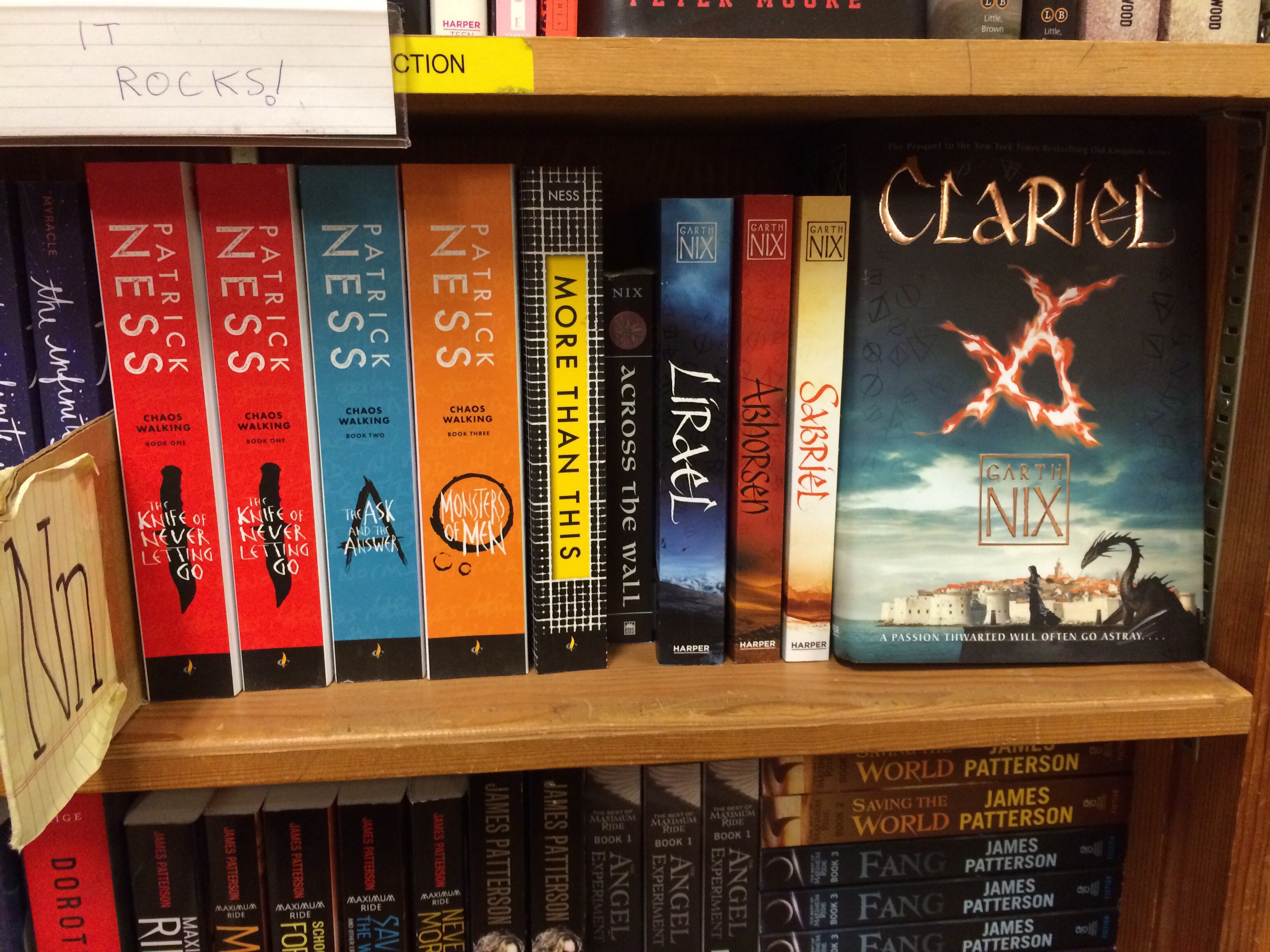 Here's where I put out a big, huge THANK YOU to you and the universe. You've been good to me. Thank you to everyone who applauded the return of writing to my life. Thank you to the glorious sponsors who put money behind that idea, so I could attend this amazing event. Thank you Alia and Kevin, for taking the "amazing" up about twenty notches. Thanks NaNoWriMo! And a mega-huge thank you goes to Ben. Your belief in me got this project started, and your support makes it all possible - I love you! Okay the Oscar music is playing now, so that's all - write dangerously!